Skip to content
Why Medical Marijuana Works for Arthritis

Why Medical Marijuana Works for Arthritis 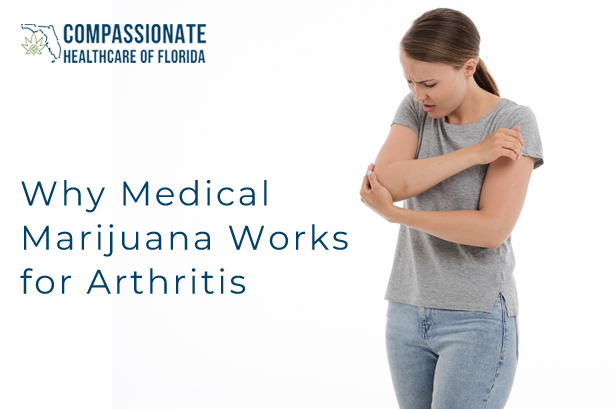 Arthritis refers to the active inflammation of one or more joints. It is a common condition that’s mostly seen in older individuals; however, it can occur in all age groups. It is important to understand that the term “arthritis” is not a disease in itself, but rather a description of a symptom.

In other words, there is no illness called arthritis, but there are several medical conditions that cause arthritis. During arthritis, inflammatory cells get recruited to the joint capsule and start releasing pro-inflammatory substances, such as cytokines, prostaglandins, and interleukins.

As a result, the joint will present with the four cardinal symptoms of inflammation:

Cannabis has gained enormous popularity over the past few years due to the changes in state policy and because of its potential health benefits. In particular, many patients with chronic conditions started to use CBD products to improve their symptoms and often added in other canabinoids found in marijuana to gain maximum relief.

In this section, we will see how medical marijuana can help patients with arthritis.

The medical literature defines chronic pain as any type of painful sensation that lasts for more than 12 weeks. This symptom is more prevalent in the elderly but can be seen in all age groups.

Using cannabis to manage pain is not new science and our ancestors took it for hundreds of years to manage pain. In fact, historians and scientists theorize that marijuana was used thousands of years B.C. for rheumatic pain, constipation, female reproductive tract disorders, and malaria. When combined with wine, cannabis was even utilized during surgical procedures to help anesthetize patients.

The mechanism that leads to this effect involves the activation of cannabinoid receptors found in the central nervous system, which showed an analgesic effect in a 2018 study.

Cannabinoids may temper down inflammation

Another way cannabis compounds can help patients with arthritis is through their anti-inflammatory properties. THC products act at the levels of CB1 and CB2 receptors found in different body tissues, with CB1 mostly prevalent in the brain and CB2 on the surface of immune cells.

This has led scientists to study the way THC/CBD and endocannabinoids (CBD receptors) interact with each other. One classic study found that THC along with CBD can downregulate the production of cytokines and chemokines, which are pro-inflammatory molecules that get secreted when we trigger the immune cells. Cytokines, in particular, are implicated in several inflammatory diseases, including arthritis.

Additionally, cannabis compounds where shown to upregulate the activity of T-cell Reg, which is a type of immune cells responsible for maintaining a proper balance of inflammation and immune reaction. Researchers stated that “Manipulation of endocannabinoids and/or use of exogenous cannabinoids in vivo can constitute a potent treatment modality against inflammatory disorders.”

After several studies that showed the potent anti-inflammatory properties of marijuana, scientists linked this feature to other positive effects of cannabinoids on diseases. For instance, the analgesic effect of THC and CBD when it comes to arthritis is linked to a reduction in inflammation and oxidative stress.

Medical marijuana is a fantastic treatment for multiple chronic conditions that cannot always be treated with conventional pharmacological drugs. With the expansion of Florida’s medical marijuana program and the increased access to a variety of high quality cannabis compounds, patients have the option to try treatments that were not always made available to them prior.

Hopefully, this article helped you understand the relationship between medical marijuana and arthritis, but if you still have questions, feel free to read further research or to contact CHF anytime.