The History of Medical Cannabis

The History of Medical Cannabis 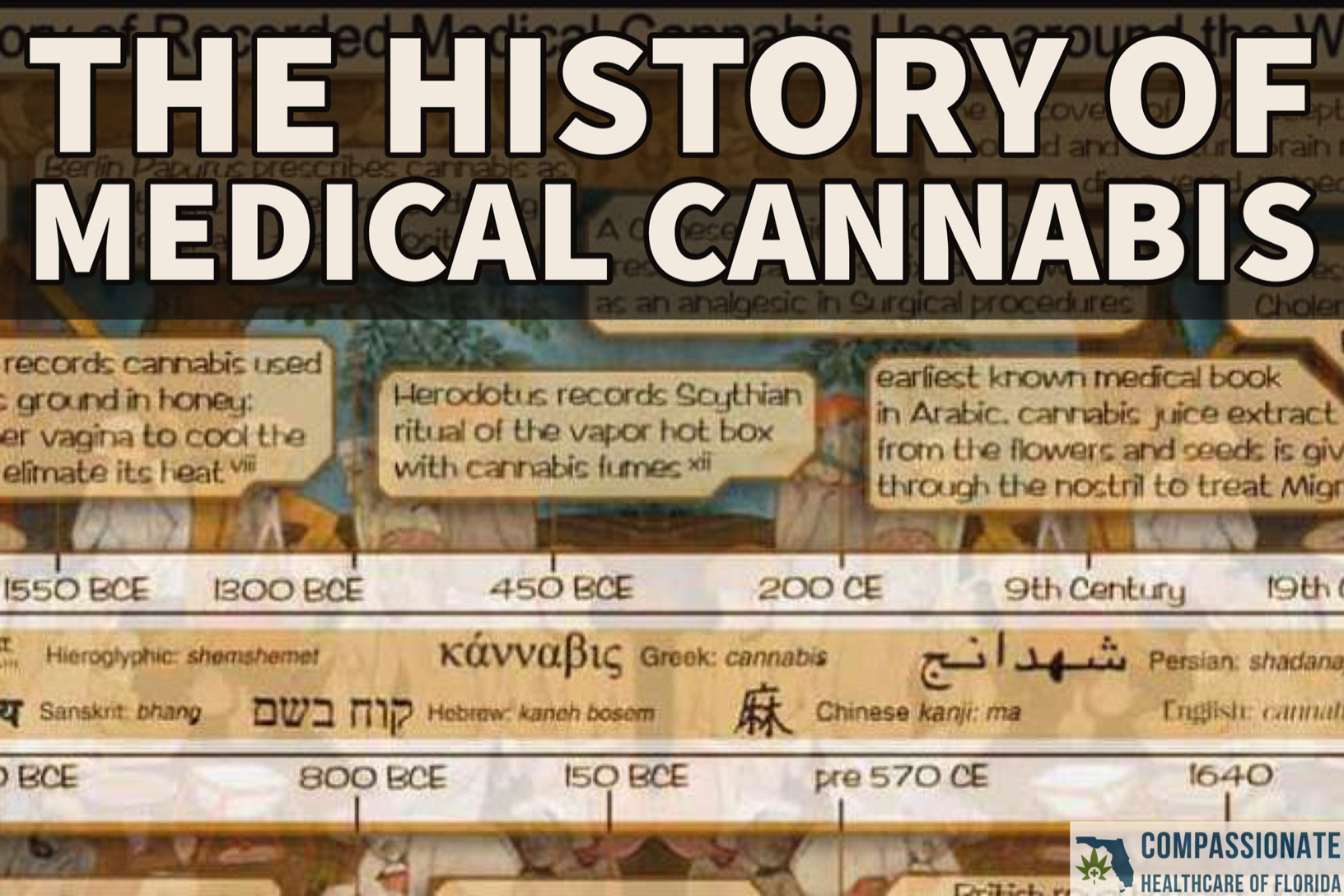 Marijuana has been used as medicine since before the written word.

From ancient Chinese to this very day, medical marijuana is a significant substance that relieves pain, reduces insomnia, eases depression, and much more. Read along as we discuss the rich history of medical marijuana to understand how far it’s come since its humble beginning.

The Ancient History of Medical Marijuana

When Herodotus described ancient Scythians throwing cannabis in a steam bath and inhaling the smoke in The Histories (5th century BCE) — it was the first time a cannabis experience was recorded.

From this period on, evidence shows that the ancient Greeks harnessed cannabis for a number of medical uses. One of the major use cases for medical cannabis was treating sores on horses.

In another instance, medical marijuana was known to treat nosebleeds, tapeworms, inflammation, and pain. Overall, archeological records show the Greeks had in-depth knowledge of medical cannabis, even to the degree to which they produced extracts with wine.

The ancient Egyptians were one of the earliest civilizations in the world, and hieroglyphics show they understood the medical potential of marijuana to an unparalleled degree.

Marijuana in ancient Egypt was used as suppositories for hemorrhoids, sore eyes, and inflammation. Ultimately, hemp was extensively cultivated in Egypt, making it one of the most crucial crops in the region.

Although it was likely that cannabis was used for medicinal purposes far earlier, cannabis as medicine wasn’t recorded until c. 200 CE, when the Chinese surgeon Huo Tua described cannabis as an anesthetic.

Even more interesting, the word anesthesia in Chinese translates directly to cannabis intoxication. In other words, it’s highly likely that the Chinese already understood the medical traits of cannabis far before 200 CE.

Additionally, cannabis in Chinese is ma, which means numbness — once again providing insight into prior knowledge of the medical potential of marijuana.

The use of medical marijuana first appeared in the ancient writings of The Vedas in India between 2000-1400 BCE.

Medical marijuana was used to ease childbirth, insomnia, pain, inflammation, headaches, and gastrointestinal disorders. Outside of severe medical issues, cannabis was revered for its properties that increase awareness, happiness, and a positive outlook on life.

From medieval Islamic empires to Germanic tribes, marijuana played a significant medical role in many societies.

Outside of medieval Islamic culture, Germanic tribes used cannabis to relieve pain during childbirth, as well as toothaches, according to archeological records.

For thousands of years, medical marijuana enjoyed its status as medicine.

However, everything began to change during the modern era in which medical marijuana was re-discovered in the West. Around 1830, William Brooke O’Shaughnessy traveled to India to learn about traditional forms of medicine.

O’Shaughnessy found that cannabis relieved countless medical issues, such as cramps, depression, migraines, insomnia, and convulsions. O’Shaughnessy is credited with introducing therapeutic cannabis to the West and Western-style medicine.

As the decades passed, so did the discoveries regarding medical marijuana’s intriguing nature.

Dr. Albert Lockhart and Manly West journeyed to Jamaica in 1964 to study the health effects of cannabis.

Rastafarians are known to consume abundant levels of cannabis, and Dr. Lockhart and West determined that this group was far less likely to experience glaucoma than non-cannabis smokers.

Surprisingly, Marinol was approved for anti-nausea and as an appetite stimulant. However, Marinol was prescribed in pill form, making it difficult for post-chemotherapy patients to swallow.

From 1996 to 1999, eight states in the USA broke away from the federal government’s cannabis prohibition ruling.

After the long and winding history of medical marijuana — we’ve finally arrived at our current time.

The landscape of medical marijuana looks completely different when compared with a decade ago — let alone half a century ago. The vast majority of states in the US have legal, medical marijuana laws, with only a handful of holdouts, such as:

As you can see, the rest of the states in the USA have adopted pro-medical marijuana laws that we all enjoy today. Many states now permit MMJ Telehealth options to expand the ease and access of medical marijuana to all that would benefit.

If you’re ready to make history as a medical marijuana patient in Florida — get in touch with Compassionate Healthcare.