The Effectiveness of Medical Marijuana on Glaucoma

The Effectiveness of Medical Marijuana on Glaucoma 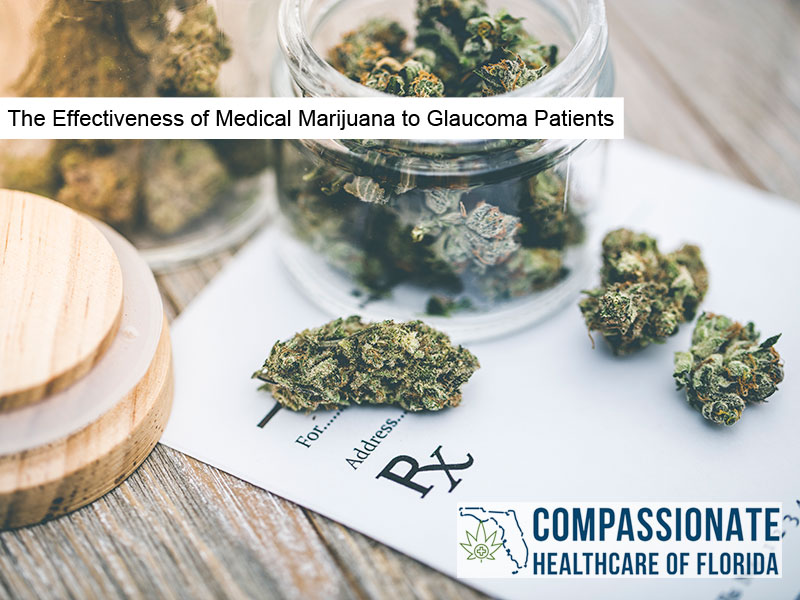 Glaucoma is a medical condition where the intraocular pressure (IOP) within the eye increases to dangerously high levels. Glaucoma is one of the leading causes of vision loss and blindness in the United States. There are roughly 3 million Americans who suffer from this condition, along with another 57 million worldwide. Previous research studies suggest that marijuana may not suit everyone equally. However, it might be worth considering if you are among those who struggle and suffer from glaucoma.

Medical marijuana has historically been used to provide relief for various medical conditions, from cancer to chronic pain. Old and new studies infer that marijuana may effectively treat glaucoma by significantly decreasing pressure within the eye. Multiple studies discovered that cannabinoids found in marijuana help reduce eye pressure levels regardless of the method of consumption. Research focusing on various consumption methods showed equal benefits whether taken orally, inhaled, or intravenously. Surprisingly, however, when researchers placed cannabinoids onto the eye directly, there was little to no effect identified.

#1. It Has Potential To Lower Intraocular Pressure

With the ability to lower intraocular pressure, marijuana has been studied as a therapy for glaucoma. Patients interested in using cannabis for glaucoma relief will learn what form and how much to take when consulting with the proper healthcare provider. These answers may vary according to individual factors such as eye strain or duration of exposure time. In most trials, a single dose of marijuana or cannabinoid was shown to maintain the desired effect and lasted three to four hours. However, to effectively control optic nerve damage resulting from glaucoma, an individual would need between six and eight doses per day for effective management.

While marijuana lowers IOP, it has some drawbacks and is not risk-free. Some side effects include decreased productivity and alterations to motor and thought functionality. Additionally, smoking anything is not healthy or safe for your lungs, and marijuana smoke contains many harmful chemicals similar to tobacco smoke. So, smoking marijuana may not be the best way to treat glaucoma.

There are many concerns about the long-term safety of marijuana use due to its associations with lung damage when smoked and any possible permanent effects on cognition. Chronic use of anything can result in a higher likelihood of developing a tolerance. The same goes for cannabis and its intraocular pressure-reducing properties. That means patients may eventually need to use increasing amounts of cannabis over time to retain similar relief. Severe local inflammation may occur if using an unregulated product that has not passed quality control standards found within dispensaries.

#3. It Helps a Debilitating Condition

Open-angle glaucoma occurs when the drainage duct gets clogged. Open-angle glaucoma (OAG) is the most common of the types and affects roughly 90% of patients. Healthcare providers can treat OAG with FDA-approved eye drops that work well if taken as prescribed to maintain visual health!

Normal-tension glaucoma is a unique form of glaucoma that is not fully understood. Normal-tension glaucoma results in damage to the optic nerve despite normal IOP. It is thought to occur due to either increased nerve sensitivity or alterations in blood flow. Sometimes, these patients are treated with medicated eye drops that lower the IOP below the normal range.

Several different drugs are effective at managing glaucoma and IOP. New research studies on medical marijuana usage and glaucoma have documented improvement in some patients for up to eight hours after ingestion.

When it comes to the effects of marijuana, not all varieties are created equal, and this can be a serious health concern. There has been much research on how different potencies affect users’ body temperatures or heart rates over time. However, there is still no FDA-approved form for medical use in America. Scientists and researchers can’t say what ingredients might trigger reactions differently among individual patients.

There exist various options, such as prescription eye drops, laser treatment, and surgery such as trabeculectomy. Trabeculectomy involves removing pieces of tissue from inside the eye and inserting an artificial tube called a shunt into the drainage channel.

Medical marijuana can control the pressure in your eyes to reduce damage to the optic nerve. Studies have shown that cannabis can lower IOP for glaucoma patients and those without glaucoma. Experts aren’t sure how this works yet. No evidence suggests daily use will help prevent or slow down the progression of disease-related vision loss such as age-related macular degeneration (AMD). The good news is scientists continue to research and study the benefits that medical marijuana may hold.

Conversely, it is important to note that combining medication and marijuana can be harmful. Using cannabis without consulting your doctor may cause more harm than good, as marijuana comes with its own side effects. Common side effects include physical and mental alterations such as impaired thought processing, impaired decision making, and decreased reaction time. Others might experience extreme paranoia or anxiety. Fortunately, these effects are temporary and will dissipate after stopping the drug.

While there is a lot of research into the potential effects that marijuana could have on our eyes, including some studies which found receptors for cannabinoids in tissue near or surrounding the optic nerve. The benefit of medical marijuana in glaucoma sufferers is related to the endocannabinoid system, cannabinoids, and delta-9-tetrahydrocannabinol (THC). THC contains high concentrations of various cannabinoids that have effectively lowered IOP.

It is important to note not all researchers agree with the findings. Many insist more long-term testing needs to be conducted before we can say anything definitive about how cannabis might affect one’s vision over time.

Although medical marijuana effectively reduces eye pressure in glaucoma patients, it is not currently the first-line treatment. However, in states where medical marijuana is legal, it can be an option for those who have not found relief from other medications. If you or someone you know struggles with glaucoma and would like to learn more about how cannabis might help, don’t hesitate to contact Compassionate Healthcare of Florida at (833) 633-3665. Our compassionate staff will answer all your questions so you can make an informed decision on whether medical marijuana could benefit your life as well.