If you want a marijuana product that packs a punch, look no further than medical marijuana concentrates. Mouth-watering terpenes, sky-high THC concentrations, and gorgeous aesthetics are what you’ll find as you browse the display at your local medical marijuana dispensary.

However, which of these concentrated works of art are best for you? Read along to learn about the best medical marijuana concentrate options in Florida. 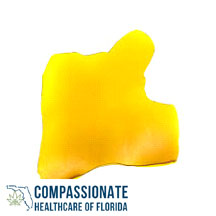 If you’re ready to dab like a pro — all you need is a shard of golden shatter.

Shatter is a cannabis concentrate that resembles a broken piece of glass. However, once you apply heat, the shard instantly vaporizes. As you inhale the smoke from shatter, you’ll be greeted by an abundance of THC, lip-smacking terpenes, and effects that will blow your hair back.

Medical marijuana patients in Florida can’t get enough of shatter because it’s one of the easiest concentrates to use. Shatter is one of the most stable forms of extracts, and it will hold its shape as long as it is kept at a cool temperature.

As you pick up a piece of shatter, you’ll notice that it’s of a golden-amber hue and is semi-transparent. Anyone that gazes upon this gorgeous shard of wax will immediately note that it harbors an intense amount of THC.

Typically, medical marijuana shatter contains 45-85% THC. As you can imagine — this is a lot of THC.

Before Florida legalized medical marijuana, shatter was illicitly produced with butane. Butane was a popular solvent to extract the cannabinoids and terpenes from marijuana plants. However, butane is dangerous to consume in any shape or form.

Now that medical marijuana is legal in Florida, dispensaries are allowed to sell shatter that’s extracted via CO2 or ethanol.

The only drawback of shatter is that it’s not as flavorful as other forms of concentrates. The stability of shatter is due to the lack of terpenes, which are volatile by nature. The higher the terpene content — the less stability. 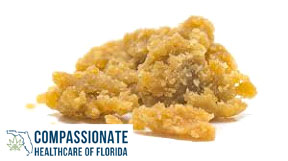 If you’re looking for a pure medical marijuana concentrate — look no further than crumble.

Extract artists produce crumble via an intricate process that requires a lab and a roomful of expensive extraction equipment.

The process of creating crumble consists of a wide range of temperatures, from subzero to 135 Fahrenheit. Furthermore, the pressure is manipulated to effectively remove any trace of solvent.

The end result is a marijuana concentrate that resembles a honeycomb in a beehive. As you hold crumble, you can chip away small portions to toss into your dab rig.

Medical marijuana crumble is exciting because it’s one of the most potent forms of extracts. It’s not surprising to find crumble in Florida that tests between 80-99% THC.

However, the incredible potency of crumble comes at the expense of flavor. To reach sky-high levels of THC, the majority of terpenes are removed during the extraction process. As you dab crumble, you’ll experience a monumental amount of THC; however, it will not contain any flavor.

Overall, crumble is one of the most popular extracts in Florida because of the mind-boggling levels of THC. 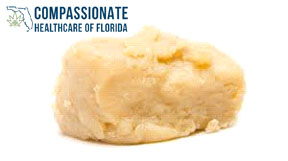 If you want potency and flavor — there’s no better option in Florida than live resin.

Live resin is a medical marijuana concentrate that features the essence of the strain extracted from it. In other words — live resin tastes and smells exactly like the living plant.

Extract artists produce live resin by harvesting a cannabis crop and immediately freezing it. This method is known as fresh-frozen, and it’s a critical component in making live resin.

The freezing process locks in the volatile terpenes and preserves them. Next, the flowers are processed via CO2 extraction. The end result is a mixture of oil and crumble.

Live resin is reminiscent of sugar that’s in the process of melting. The moment you place your nose near it — you’ll be shocked by the intense aroma of cannabis.

Wait — it gets better.

As you dab live resin, your senses will experience marijuana in its totality. As you inhale the silk-like smoke, you can discern the multitude of terpenes present. Overall, there’s nothing as satisfying as dabbing medical marijuana live resin.

Furthermore, live resin features an abundance of THC. Typically, live resin tests between 45-85%. The experience of live resin is second-to-none once you indulge in a whopping amount of THC combined with a mouthful of terpenes.

If there’s one product that deserves your attention at your local medical marijuana dispensary — it’s live resin. 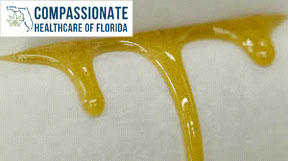 Rosin is a solventless concentrate that boasts elevated THC levels and mouth-watering terpenes.

Similar to the way avocado oil or peanut butter is produced, rosin is created by crushing marijuana flowers. As thousands of pounds of pressure are pushed against marijuana flowers, the cannabinoids and terpenes are squished out.

Next, rosin producers scrape the oil and spread it on a sheet. The end product is a fine film of pure trichomes and resin compounds. If you’re looking for a delicious and potent product without the solvents — rosin is exactly what you’ve been waiting for.

Which Is The Best Medical Marijuana Concentrate?

If you want to find the best medical marijuana concentrate in Florida — it’s time to heat up the dab rig and try each of these incredible products.

Shatter, live resin, rosin, and crumble, feature incredible traits, such as showstopping flavor, outstanding potency, and long-lasting effects. Depending on your needs, you may decide that one of these concentrates is better than the rest.

The world of medical marijuana concentrates is vast, and there’s no better way to experience it than diving headfirst.

If you’re ready to try the best concentrates that Florida has to offer, make sure to apply for your medical marijuana card today at Compassionate Healthcare of Florida.