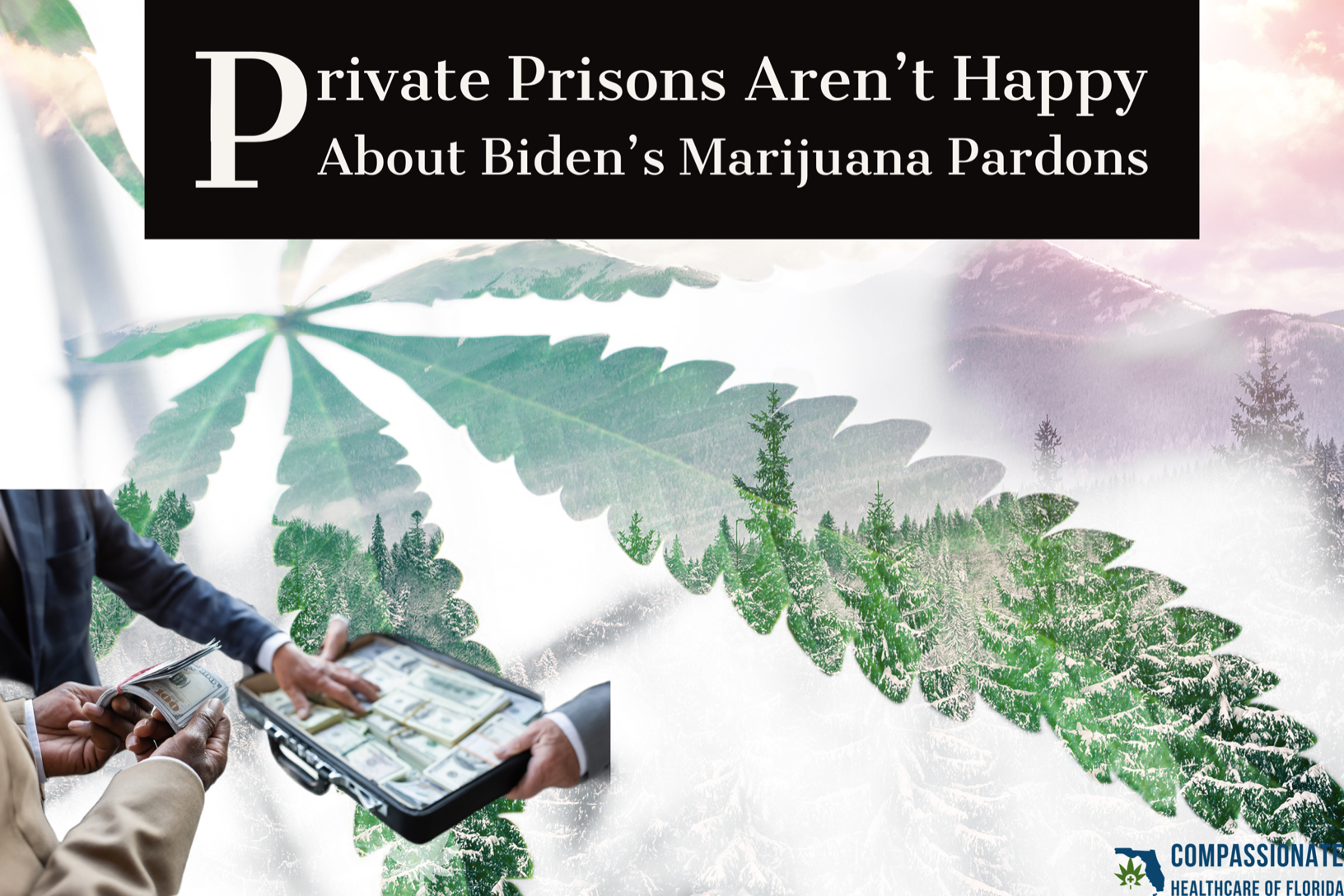 For-profit prisons rely on strict drug laws and the ongoing war on drugs to maintain high profitability. Now that low-level marijuana pardons are coming — GOP governors are risking the livelihood of thousands of individuals in a handful of states.

Below, we’ll discuss everything you need to know about private prisons, which states are rejecting marijuana pardons, and why pardoning low-level marijuana offenses is a step in the right direction.

Private Prisons and the War on Drugs

The United States has the largest private prison population in the world.

The staggering incarceration rate can be traced back to the early days of the war on drugs. As harsh drug enforcement laws began in the early 1970s, state and federal prison populations didn’t begin to overflow until the 1980s.

Private prisons were born from inmate overcrowding to the rising costs of housing the prison population. In 1984 the first private prison company, CoreCivic, stepped out into the light and established a new trend in the United States: for-profit prisons.

Fast-forward to the present, CoreCivic has generated nearly $2 billion in annual revenue. However, CoreCivic isn’t the only private prison that generates massive profits from incarcerating low-level marijuana offenders.

Other large for-profit prisons are operated by the GEO Group, LaSalle Corrections, and the Management and Training Corporation. Known as the prison industrial complex, private prisons in the United States are worth upwards of $70 billion.

Instead, the private prison industry wants stricter cannabis laws to ensure their prisons remain full and profitable. Although it’s challenging to imagine that a group wants to imprison others for a profit — CoreCivic’s annual report says it all:

“The demand for our facilities and services could be adversely affected by the relaxation of enforcement efforts, the expansion of alternatives to incarceration and detention, leniency in conviction or parole standards and sentencing practices through the decriminalization of certain activities that are currently proscribed by criminal laws.”

The report finishes by stating,” Any changes with respect to drugs and controlled substances or illegal immigration could affect the number of persons arrested, convicted, and sentenced, thereby potentially reducing demand for correctional or detention facilities to house them.”

During his speech, President Biden called on governors across the United States to begin the long and arduous process of pardoning simple marijuana offenses. Although the proclamation was met with excitement across the nation — GOP governors who rely on funding from the prison industrial complex promptly dug their heels in.

Governor Bill Lee of Tennessee stated that he is “not considering” granting any pardons related to cannabis possession. Greg Abbott claimed that pardons were impossible in Texas and refused to heed the request.

Although it’s possible to believe that these three GOP governors are against simple-marijuana possession pardons on moral groups — donor funds paint an entirely different picture.

Furthermore, Florida Governor Ron DeSantis received over $250,000 from the private prison industry, but he has yet to declare a stance on the subject.

Non-violent marijuana offenses, such as simple possession, are the reason behind thousands of incarcerations.

Aside from jail time, those convicted of simple marijuana possession have lifelong records of their offense — making housing, jobs, and education challenging. Considering cannabis is legal (recreationally or medicinally) in most states, handing out lengthy jail sentences for simple possession does not line up with the current state of cannabis laws.

Unlike Lee, Abbott, and Hutchinson, many governors across the nation agreed with the plan to begin pardoning simple possession offenses. Ultimately, the recent proclamation echoes the MORE ACT — the bill that would decriminalize and expunge criminal records related to low-level marijuana offenses.

By pardoning simple possession offenses, the United States will give a second chance to thousands of individuals that have suffered under strict laws crafted by the war on drugs.

The Future of Cannabis Pardons and a Possible Rescheduling of Cannabis

During President Biden’s speech, he mentioned that the federal government would begin looking into rescheduling cannabis.

As it stands, marijuana is still a Schedule I drug alongside cocaine and heroin. By removing the Schedule I status, cannabis would finally leave its prohibitive past behind and lay the foundation for a greener future.

Although a few GOP governors refuse to heed Biden’s call for reform, the majority of the nation is ready to pardon simple cannabis possession and allow those affected to move on with their lives.

If you require cannabis for medical purposes in Florida, renew or apply for a medical marijuana license.

Florida allows medical marijuana — but not yet recreational cannabis. Therefore, it’s essential to protect yourself from simple-possession infractions that could land you in legal trouble.