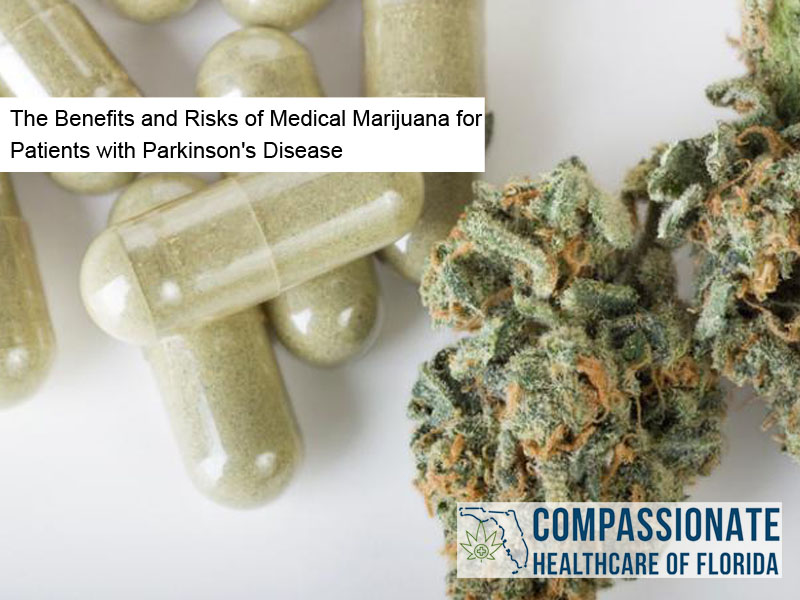 Although the FDA has not recognized the marijuana plant as medicine, there are two main cannabinoids from the plant used for treatment: cannabidiol (CBD) and delta-9-tetrahydrocannabinol (THC).

Cannabidiol, aka CBD, is a compound that comes from the Cannabis plants but is devoid of THC. CBD’s active ingredients are understood to reduce inflammation and pain while avoiding the psychoactive effects of THC. You can use CBD to treat many chronic diseases, including Parkinson’s. The risks associated with traditional marijuana use are not present in cannabidiol.

CBD products come in a variety of forms, such as:

In states that have legalized medical marijuana, CBD is legal with the caveat that it is derived from industrial hemp containing less than 0.3% THC. CBD can be bought over-the-counter in some states without a prescription or medical marijuana license.

The laws regarding medical marijuana and CBD vary from one state to the next in the United States. To become a registered medical marijuana user in states that permit it, you must first see a qualified doctor who completes the forms per their state’s marijuana registry. Once registered and approved by the state’s registry, a medical marijuana card is issued, allowing you access to buy medical-grade marijuana from certified dispensaries.

Medical marijuana is not legal in every state, nor is it permitted in every country. Be sure to consult with your doctor and check your local laws. Although your state may have legalized it, it is crucial to be mindful that marijuana is illegal to possess at the federal level, despite local and state laws.

Can Medical Marijuana Be Used To Treat Parkinson’s Symptoms?

The endocannabinoid system is spread throughout the entire body, including the brain, organs, connective tissues, glands, and immune cells. It is comprised of cannabinoid receivers (a receptor on the outside of a cell that causes something to happen inside the cell when activated) and neurons (brain cells) that regulate thinking.

After Parkinson’s Disease (PD) patients shared anecdotal stories and posted on social networks about how cannabis decreased tremors, researchers became enthusiastic about studying cannabis for PD. Some researchers believe that cannabis may be neuroprotective, saving neurons from the damage caused by PD.

Researchers have been studying cannabinoids for their effects on debilitating PD-related symptoms. Two of these symptoms are bradykinesia and dyskinesia. Bradykinesia refers to the slowness of movement, and dyskinesia refers to involuntary, uncontrolled movements. Despite promising preclinical results, conclusive evidence supporting cannabis’ benefits for patients with PD is lacking.

PD patients should maintain extra caution when using cannabis because of the known effects cannabis has on behavior, thought processing, decision making, and reaction time. The natural progression of PD can physiologically alter executive function alone. Therefore, patients with PD may be more prone to altered thinking and decreased control of risky behavior. Patients with any medical condition that affects executive functioning are encouraged to consult with their medical provider before taking any medication that may increase this effect.

Parkinson’s Disease is caused by losing dopaminergic neurons in the substantia nigra. A deficiency of dopaminergic neurons results in losing control over voluntary movements. It manifests itself as tremors, rigidity, or bradykinesia. Psychosis, cognitive impairment, and depression are other non-motor symptoms. The exact cause of PD is unknown; however, genetic or environmental factors are suspected of playing a role. Current treatment options for PD include dopamine-promoting medications such as Levodopa (biosynthetic precursor of dopamine) and various other pharmaceuticals. However, these medications come with significant adverse effects. Although Levadopa may relieve motor symptoms, it is essential to know that it does not stop the progression of PD and can even lead to worsening dyskinesias.

Nabilone, a synthetic cannabinoid receptor antagonist, claims to reduce dyskinesias significantly. It also increases the Levodopa’s duration of action by 76% when given together. These results contrast Rimonabant (a CB1 antagonist) which did not improve motor symptoms in PD.

Medical marijuana has yet to be approved by the FDA for any condition, including PD. The medical community still debates how medical cannabis can help manage Parkinson’s symptoms on both sides. Still, they are interested in investigating further to see if it may aid in treating other medical conditions related to PD, such as anxiety and depression.

Some research has shown that medical marijuana can improve motor and non-motor symptoms such as rigidity, tremor, sleep, and pain for PD patients. One study demonstrated the effects of cannabis on 85 patients with Parkinson’s Disease. The majority of these patients consumed half a teaspoon of cannabis leaf and were prescribed pharmacotherapy. A total of 46% reported that they experienced relief from PD symptoms an average of 1.7 months after their first use of cannabis. These findings suggest that chronic marijuana use may be necessary to improve symptoms. The most common improvement reported by cannabis users was bradykinesia, followed closely by muscle rigidity or tremor. A further 14% reported improvement in levodopa-induced kinesia after using cannabis. Researchers noted that patients who had a higher concentration of THC metabolites in their urine and used cannabis for more than a month had increased reports of PD-symptom relief.

People with PD report a calming effect on their tremors, dyskinesia, and anxiety with marijuana use. Several studies monitored PD patients being treated with CBD and found no evidence that the abrupt cessation of CBD increases dystonia and dyskinesia. Consistent with other findings, research on MS and PD patients discovered that the disability rate for marijuana users was lower than that of non-users. Other areas that cannabis positively impacted included memory, mood, energy, and sleep quality. Nearly 85% of patients reported “moderate to high effectiveness,” as evident by improvements in symptoms and a lack of adverse effects from cannabis.

Depression is another common symptom of PD, and sadly it often goes undiagnosed or undertreated. The exact mechanism causing depression in PD patients is theorized to be due to the loss of endocrines, which control mood and behavior. Epidemiological studies have shown that people who use marijuana regularly or weekly experience a brighter perspective than those who don’t. Other studies have also demonstrated a link between heavy marijuana use and depression. However, it is unclear if the depressive symptoms were caused by marijuana or related to other factors. Although the verdict is still out, evidence suggests marijuana possesses some neuroprotective qualities that help improve symptoms and slow the progression of PD.

As of 2021, cannabis use for medical purposes has been legalized in all but 12 states in the US and Washington DC, Guam, and Puerto Rico. OVer recent years, medical marijuana has gained legal status in a majority of the 44 European countries. The medical community has yet to produce consistent evidence to support medical marijuana as a treatment for patients with PD. However, the health benefits of medical cannabis are reasonably consistent in decreasing stress levels, enhancing pain management, enriching sleep quality, stimulating appetite, and alleviating the severity of depression.

As mentioned earlier, cognitive impairments are one of the more common side effects of marijuana use. It is well-known that marijuana can cause impairments in working memory. Luckily, this effect is temporary and can be resolved by stopping the drug.

While cannabis use is helpful for those with decreased appetites, chronic use may result in weight gain. It should be considered as a potential side effect for some. Although marijuana is commonly used in adolescence and may influence obesity, an extensive study of adults has shown that marijuana use does not cause obesity. A recent survey of adults with MS and PD did not show any evidence of marijuana users becoming obese.

A common misconception about marijuana use is that it only decreases motivation and promotes laziness and inactivity. However, in a recent study involving MS and PD patients, both users and non-users spent equal amounts of time sitting and doing physical activities.

Marijuana abuse can cause alterations in memory and reaction time, affecting executive functions, which may interfere with learning. Frontal dysfunction has also been documented, which can cause poor planning, reduced information processing speed, poor self-monitoring, and poor planning.

After long-term marijuana use, dependence is the primary concern. Estimates in the US suggest that 5.1% of users aged 12 and older develop a cannabis use disorder. One-third of those who use it are addicted or dependent. A third of users of marijuana experience withdrawal symptoms, and between 50% and 95% of heavy users. One study surveying long-term marijuana effects found that persistent marijuana users experienced a six-point decrease in IQ compared to non-users. Chronic and heavy marijuana use can lead to dependence, cognitive impairments, and depression, as well as increase the risk of developing lung diseases.

As medical marijuana continues to gain popularity, there are many benefits and risks of medical marijuana that patients should consider beforehand. It is highly recommended that new users seek guidance from a trained, licensed medical professional before using medical cannabis. It is also good practice to inform your healthcare providers of your status as a medical marijuana patient to ensure oversight and enhance safety.

While there is still much to learn about the benefits and risks of medical marijuana for patients with Parkinson’s Disease, marijuana treatment may provide some relief from symptoms. If you or someone you know suffers from Parkinson’s Disease and would like to learn more about how cannabis might help, don’t hesitate to contact Compassionate Healthcare of Florida at (833) 633-3665. Ou compassionate staff will answer all your questions so you can make an informed decision on whether medical marijuana could benefit your life as well.