How Long Does Weed Last In Your System?

How Long Does Weed Last In Your System? 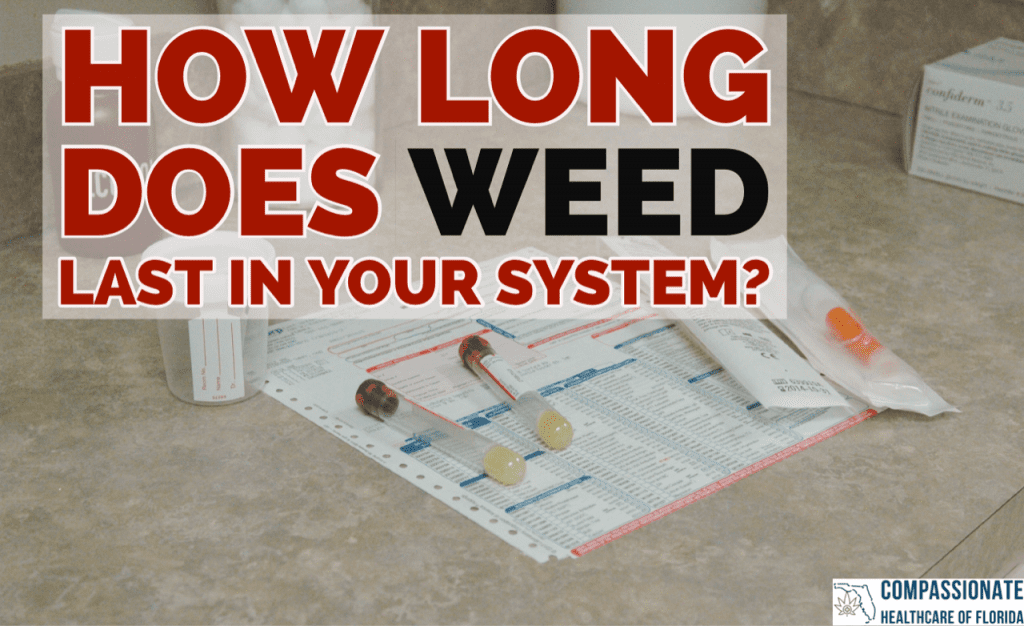 Lately, cannabis laws have been changing rapidly in the USA. It seems like prohibition is almost over, but unfortunately, some companies still test for cannabis in drug tests.

Hopefully, one day we can move past this unfair routine, but it’s still common for now. Now you might be wondering—how long does weed last in my system?

The answer is—it depends. Continue reading below as we tell you all about how long cannabis stays in your body.

How Does THC Move Through the Body?

To understand how long weed lasts in the body, we need to know how it moves around. Depending on how you ingested the cannabis is what makes the difference.

Each puff of a joint or vape from a Florida dispensary brings THC-rich smoke or vapor into the lungs. From there, the THC enters the bloodstream and is pumped all around the body.

Eventually, the THC makes it to your brain, where it activates the endocannabinoid receptors, and then you start to feel high.

After a while, the THC passes through the liver and is broken down into a metabolite. Most drug tests look for a metabolite of THC called 11-nor-9-carboxy THC (THC-COOH).

With edibles, it’s a much different story. Once you consume a cannabis edible from a Florida dispensary—it must be broken down and go through the digestive system.

Once the THC reaches the intestines, it’s absorbed into the bloodstream and then processed by the liver. The liver then turns it into 11-hydroxy THC, which is like THC on steroids.

The 11-hydroxy THC moves around the body before being broken down again into THC-COOH.

Factors That Affect How Long Cannabis Stays in Your System

As we mentioned, it depends on how long cannabis can stay in your system because everyone is different. Depending on certain factors—weed will clear out of your system quickly or take much longer.

Frequency of Weed Use

How often you smoke or ingest cannabis plays a significant role in how long cannabis stays in the system. If you use cannabis often, then it will likely stick around much longer than those who have a joint here and there.

How long weed lasts in the system also depends on how much weed you have. If you have a large dose, then it’ll take longer for your body to clear the THC out.

Fat also influences how long weed lasts in the system. That’s because THC and its metabolites are fat-soluble.

That means that they can be stored in fat cells for an extended period of time. However, when fat is burned from exercise, the THC and metabolites can be released.

Genetics also plays a factor in how our body processes THC. That’s because each of us has different variants of the enzyme that breaks down THC.

In some people, the enzyme is quick to break down THC, while it takes much longer in others.

How Long Does Weed Last in the System?

It all depends on how you smoke, how often you smoke, and who you are. However, there are general timelines for how long weed can last in different parts of your body.

That’s because THC and its metabolites can be detected in urine, blood, saliva, and hair. So now the question is—how long does weed last in these parts of the body?

How Long Does Weed Last in Your Urine?

Urine is the preferred drug screening method used to detect cannabis. A study in 2005 found that THC is rarely detected in urine after 30 days.

However, the detection of cannabis metabolites depends on how sensitive the test is. Most standard tests won’t be able to detect cannabis use after 10 days.

However, a new study from 2017 has found that marijuana can be detected in urine for 3 days in irregular users, 7 days in regular users, 15 days in daily users, and 30 days for the heaviest users.

How Long Does Weed Last in Your Blood?

As we mentioned, after smoking, THC enters the bloodstream and can be detected instantly. However, the half-life of THC is only 30 minutes.

After 30 minutes, the amount of THC quickly decreases. That means that THC can be detected in the blood only for about 5 hours.

Unfortunately, the metabolite THC-COOH sticks around much longer and can be detected in the blood for over a week.

How Long Does Weed Last in Your Hair?

It turns out that THC and its metabolites can stay in the hair follicles for a long-time. It’s even thought that non-cannabis users can have THC in their hair follicles from being near a smoker.

It’s been found that THC-COOH can stay in the hair for up to 90 days. However, it depends on how much you’ve smoked.

Light users will likely not have any THC detectable in the hair, while regular users will.

How Long Does Weed Last in Your Saliva?

It turns out that THC can’t be detected in the saliva after a short period. However, THC metabolites can be detected, but it depends on how often someone smokes.

Irregular users could have THC metabolites detected in their saliva for up to three days, while for regular users, it could be detected for one month.

Get Your Medical Marijuana Card Today

Now that you know how long weed lasts in your system, you’ll know when to start or stop smoking cannabis. However, to get cannabis in Florida, you’ll need a medical marijuana card.