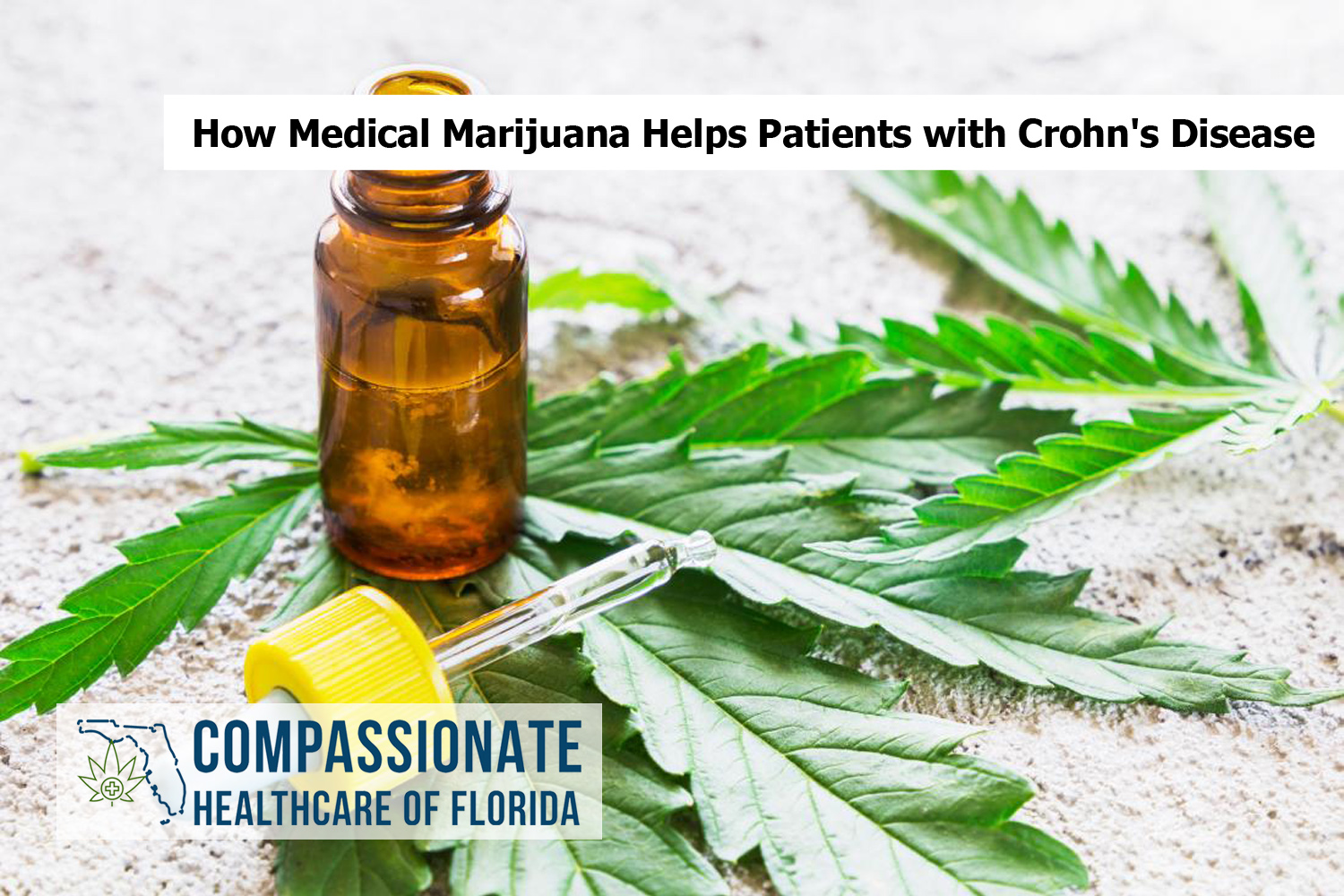 Crohn’s Disease is a chronic inflammatory bowel disease that affects the lining of your digestive tract. It has been shown to cause pain, cramping, diarrhea, fatigue, and weight loss. Many people don’t know that medical marijuana can help with these symptoms and relieve nausea and abdominal discomfort. In addition to people living with Crohn’s Disease, those suffering from irritable bowel syndrome (IBS) may also find benefits in this treatment option. Studies show that medical cannabis may be used to stimulate appetite and relieve feelings of nausea associated with IBS sufferers who have not responded well to other treatments or medications. Medical Marijuana can offer significant relief for patients who have both Crohn’s Disease and Irritable Bowel Syndrome.

Crohn’s Disease is an inflammatory condition affecting any part of your small or large intestine. It may be continuous, involving multiple segments or it may affect the colon in some people, which makes up a section near where you evacuate one’s bowels. Symptoms vary from mild to severe and come on gradually without warning, so they’re hard for others, even doctors, to spot at first glance! There might also be periods when we have no signs/symptoms (remission).

When the condition is active, the following signs and symptoms may appear:

Many scientists are still trying to figure out what causes Crohn’s Disease. Factors like heredity and a malfunctioning immune system may play a role in its development. Still, diet or stress do not seem likely culprits given that they don’t cause it alone, either by themselves or when combined with other factors present when individuals contract this condition. However, some people with Crohn’s Disease may also develop a more serious inflammatory bowel disease called ulcerative colitis. Some studies have shown clusters within families, suggesting a genetic component at play here.

Heredity: Crohn’s Disease can be hereditary, but most people who have it do not come from a family with the same condition. A genetic link may explain why some are more likely than others to develop Crohn’s bowel inflammation. However, many scientists are still trying to figure out how specific alleles (genetic variations) affect your risk for this digestive disorder.

Immune system: There is a possibility that a virus or bacteria may trigger Crohn’s Disease, though scientists have not yet identified it. When the immune system tries to fight off this invader via inflammation in our digestive tract, there can be an abnormal response from within. This causes those cells to be attacked by mistake due to miscommunication between them and other White Blood Cells of yours – all because they saw something suspicious looking!

Is Marijuana Effective for Crohn’s Disease?

Inflammatory bowel diseases have become very common, and some people with IBD are turning to cannabis of one type or another for symptom relief. There is also a little bit of evidence that it may help Crohn’s Disease in particular – though the research isn’t conclusive yet on whether this natural medicine helps alleviate symptoms like improved appetite and sleeping patterns while you’re trying out new treatments.

Dr. Jami Kinnucan, a gastroenterologist at the University of Michigan, says that while cannabis can impact gut inflammation and brain function, it’s not clear if there is any objective improvement in these areas or reduction of an inflammatory burden overall. Crohn’s Disease is one such condition where some treatments might control your symptoms but do little else for you since they only reduce levels of mild cases, which are still present even after treatment has been completed. This means patients must rely heavily upon other factors like diet changes/supplements, etc.

She says that if you have abdominal pain, it might not be from an ulcer or Crohn’s Disease. Her advice for treating the symptoms of these conditions with cannabis would need to do more than mask them. Instead, it should address what is causing those particular issues for patients’ symptoms to go away entirely and stay gone forever.

What the Research Says

Experts generally agree that the data on cannabis for Crohn’s is uncertain. However, several small clinical studies have been conducted in people with an active form of this Disease, and they show promising results so far. Altogether, less than 100 patients were part of these three trials, which makes it difficult to draw any conclusions yet about whether marijuana can help alleviate symptoms or control your condition better when compared against other treatments out there currently available. However, one study suggests smoking cigarettes containing THC might relieve those not responding well enough from previous medical interventions.

The other two studies looked at CBD oil, and neither found it helped people control their Crohn’s Disease substantially. Still, one of them did show some evidence that they could live a better quality of life with a less severe form of inflammatory bowel syndrome (IBD).

Current research is limited, and there are many varieties of cannabis. The active ingredients in this plant, THC, and CBD, come from two primary sources: marijuana with high THC and hemp without much tetrahydrocannabinol (THC) but high CBD. We need more time studying all compounds found within these plants before determining their benefits on Crohn’s disease symptoms over other treatments available today, such as pharmaceuticals.

One reason it’s complicated? It’s tricky because we don’t know precisely what compounds will work best with your body chemistry. However, studies show that when patients use both therapies together, they experience significantly better results than if treated separately.

A recent article by Jami Kinnucan says the evidence available doesn’t rule out cannabis’ potential benefits for people with Crohn’s. One reason these studies might not show any benefit could be that they use sub-par cannabinoid formulations. Some experimental data is showing how cannabinoids can help inflammation, but if we follow patients longer and see their progress in a more targeted way, then perhaps this will prove beneficial too, especially since eight weeks isn’t usually enough time during which to evaluate results.

How to use it

Users can either smoke the drug or use a vaporizer. Vaporizing is becoming more popular as is allows people to inhale the marijuana compounds without combustion or burning, like joints with cannabis rolled up inside them. Traditional smoking may be more harmful because it burns and destroys the plant matter containing terpenes that offer health benefits when consumed raw (such as in an edible). Users could also acquire medical cannabis in forms such as oils, edibles and capsules. Medical marijuana isn’t always cheap to come by. Still, prices have dropped considerably since the establishment of the medical program and depending on the dispensary or MMTC location where it’s acquired. Medical cannabis can sometimes be grown at home, but only if one is registered as a patient with that state’s local health agency, which allows for personal cultivation.  Unfortunately, in Florida, homegrown is not currently permissible.

Legal weed dispensaries are available in different states, both online and offline, where products are available for purchase. What you purchase can vary widely in quality depending on where it’s acquired; however, by state law it is tested for purity and safety before sale. Medical weed that is lab-tested will include the dispensary’s name and other identifying information such as a business license or certificate of authorization depending on one’s state. Patients with other health conditions that legally qualify for medical cannabis should seek advice from their primary healthcare provider before deciding whether or not to acquire and use it.

Benefits of Marijuana for Crohn’s Disease

Cannabis is a group of plants that can be used medicinally in many ways, including smoking or ingesting edibles. Cannabis contains nearly 500 chemicals, with the most well-known being cannabidiol (CBD) and delta-9‐tetrahydrocannabinol (THC). The best way for patients suffering from certain conditions will depend on what kind you have access to.

Marijuana has been studied for its effects on Crohn’s Disease in recent years. But because different studies have looked at different doses and chemical compounds of the plant, it is hard to draw firm conclusions about whether this drug will help manage your condition.

Different studies found that marijuana provided some relief for people with Crohn’s Disease. The beneficial effects were seen primarily among those patients who smoked THC-rich cannabis which helped reduce their inflammatory symptoms and increased the likelihood they would have a reduced degree of activity compared against smoking non-psychoactive varieties containing fewer terpenes like CBDV does not seem so helpful, according to one review.

The two adverse outcomes are also worth noting: an increased risk of drowsiness, nausea/vomiting, & difficulty concentrating due to the drug’s central nervous system-activated chemicals, THC and CBD.

Some studies have looked at the effects of marijuana use on people with Crohn’s Disease, but these did not randomize participants. One such study was published in October 2019 by Digestive Diseases and Sciences, which compared hundreds of otherwise similar users versus nonusers during 2012-2014. It found that those who used cannabis were less likely to need blood products transfusions or undergo colectomies for enteral feeding tube placement than the nonusers. Still, there was no difference in rates of hospitalization or surgery due to Crohn’s Disease.

The results of a large study published in June 2019 have been mixed. At the same time, cannabis users with Crohn’s Disease had lower risks for colorectal cancer, anemia, and needing parenteral nutrition. The rates of active fistulizing Disease or intra-abdominal abscess formation were higher in this group, according to findings from another recent article by Annals Translational Medicine.

Cannabis can have a variety of side effects. These are usually brief, and some people won’t experience them at all, depending on their genetics or the amount that they use. Side-effects typically subside after one uses cannabinoids regularly for an extended period without any more exposure to them. However, long-term outcomes may be different because these take longer than just minutes!

Marijuana will require users to be extra cautious, especially when doing things such as driving a car or operating machinery. Long-term side effects are minimal but can include addiction to the drug in some rare cases. There is also concern that people who smoke marijuana regularly will develop health problems like chronic coughing.

While some people experience relief from their condition, it can also cause problems such as nausea and vomiting that lead them into frequent bouts of stomach cramps known as “cannabinoid hyperemesis syndrome.” Healthcare professionals recommend avoiding medical marijuana in pregnant women because we don’t know enough about how cannabis affects an unborn baby’s developing brain or any risks associated with prenatal exposure. Other high-risk groups include those who have a personal history of mental illness- this could worsen symptoms, so long-term users might want to avoid using cannabis altogether. The FDA hasn’t approved medical marijuana, so don’t use if one is pregnant or nursing!

People with Crohn’s Disease have reported that medical marijuana helps to ease some of their symptoms. However, there is a need for further research before we can say definitively if it will benefit people in this way or not.

It should also be noted that other treatments exist which may help someone live without having constant pain while managing an illness like yours successfully – talk with your doctor about what your options are!

Medical marijuana has been shown to help with symptoms of Crohn’s Disease. If you or someone you know suffers from this condition, talk to your doctor about medical cannabis as an option for treating the pain and discomfort caused by Crohn’s. Compassionate Healthcare of Florida is a physician-led organization that can give you more information on how medical marijuana may be able to help manage your symptoms without the side effects seen in many other medications used for treatment. Contact our office today at (833) 633-3665, and don’t hesitate to ask if there’s something we can do to help!